The Grammar of Ornament Series is based upon a favorite book by the same name which documents designs ancient to modern.  This series includes Moresque, Byzantine, Middle Ages, and Greek designs. 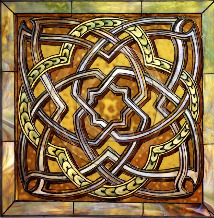 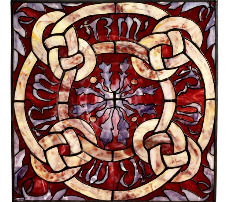 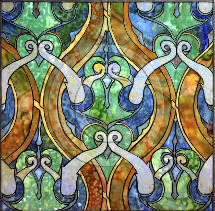 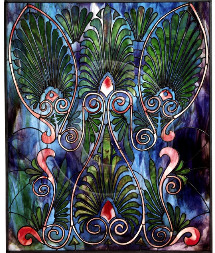 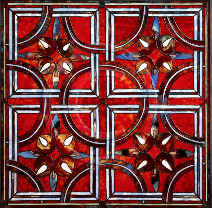 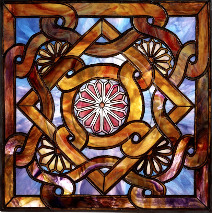 These windows are all the same size, 27.25" diameter, framed in oak that is painted a dark metallic oil-rubbed bronze finish.  I chose these windows for the variety of their traceries, which are exactly to scale with their namesakes, and are depicted with tile.  On such a small scale, the real windows' stories are not possible to represent, and therefore the glass is intended, where possible, to mimic the general feel of the window's namesake, as if one is standing in the cathedral and squinting at it.  I took great liberties with glass design while still trying to hint at the overall effect of the original.  I was not successful in obtaining pictures of the original glass in many of these and this is usually indicated by a broken-glass theme.  Some of the older windows such as Kirkstall Abbey, are depicted in simpler color schemes as there may not have been the breadth of colored glass available at that time.  The final window, Convento de San Fransisco was added simply because while touring there (Lima, Peru), I was struck by the huge pits of femurs and skulls in its catacombs.   This particular window depicts the femurs.  Window construction:  Each window contains double panels of glass, together encased by tile.  The top panel is colored glass chosen for sparkle and basic color.  The back panel is a clear glass chosen for its different sparkle; the whole effect intended to maximize brilliance when struck by the sun.  This series of 14 windows took exactly two years to make.

The photos below depict the windows backlit.  I've included one photo at the end, of a front-lit window, to show the tile representing its tracery. 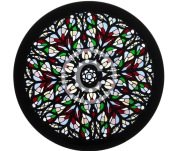 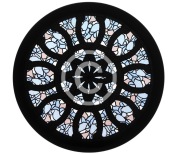 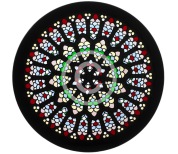 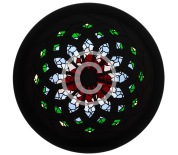 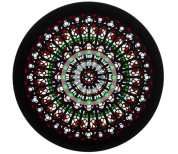 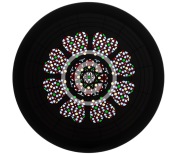 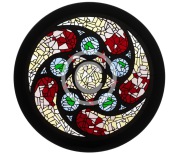 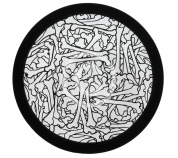 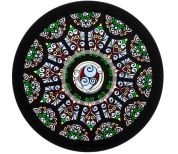 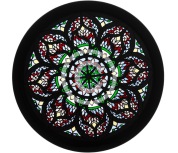 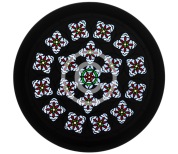 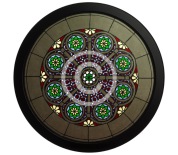 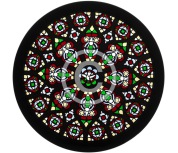 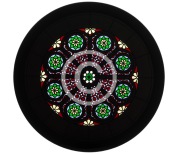 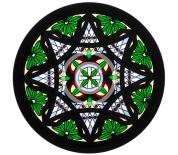